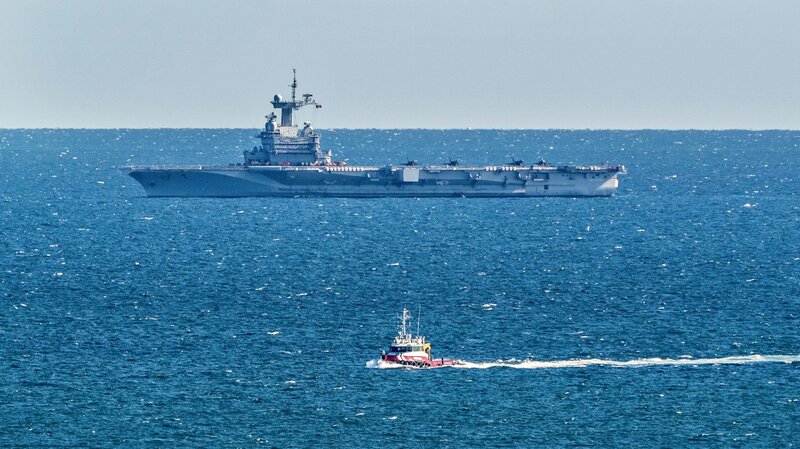 French aircraft carrier Charles de Gaulle cruises at the coast of Frederikshavn in Denmark on March 29. The carrier is returning to home port after suspected cases of COVID-19 were found aboard. / Henning Bagger/Ritzau Scanpix/AFP via Getty Image

In a statement, the ministry said aboard the vessel “around forty sailors are today under close medical observation. They are showing symptoms consistent with possible COVID-19 infection.”

“The first cases showed symptoms recently,” the ministry said. “There are no signs of aggravated cases among the patients.”

Following joint exercises in the Baltic Sea with other European navies, the carrier was originally scheduled to return to the Mediterranean port of Toulon on April 23, but following the likely cases aboard, it was ordered back early, according to the website Naval News.

A screening team will be dispatched to the carrier on Wednesday to investigate the cases and to try to prevent the shipboard spread of the virus, the website said.

The statement from France’s Ministry of the Armed Forces comes after the USS Theodore Roosevelt, a U.S. Navy nuclear-powered carrier, experienced a similar outbreak.

The Roosevelt’s skipper, Captain Brett Crozier, was subsequently relieved of his command after a letter he wrote that was critical of the Navy’s handling of the outbreak became public.

Days after Crozier was sacked, Navy Secretary Thomas Modly addressed the ship’s crew in Guam, calling their former commander “stupid or naive” for allowing the letter to leak to the media. Modly’s address, in which he acknowledged that Crozier was popular among the crew, only served to further the controversy, leading to Modly’s resignation on Tuesday.